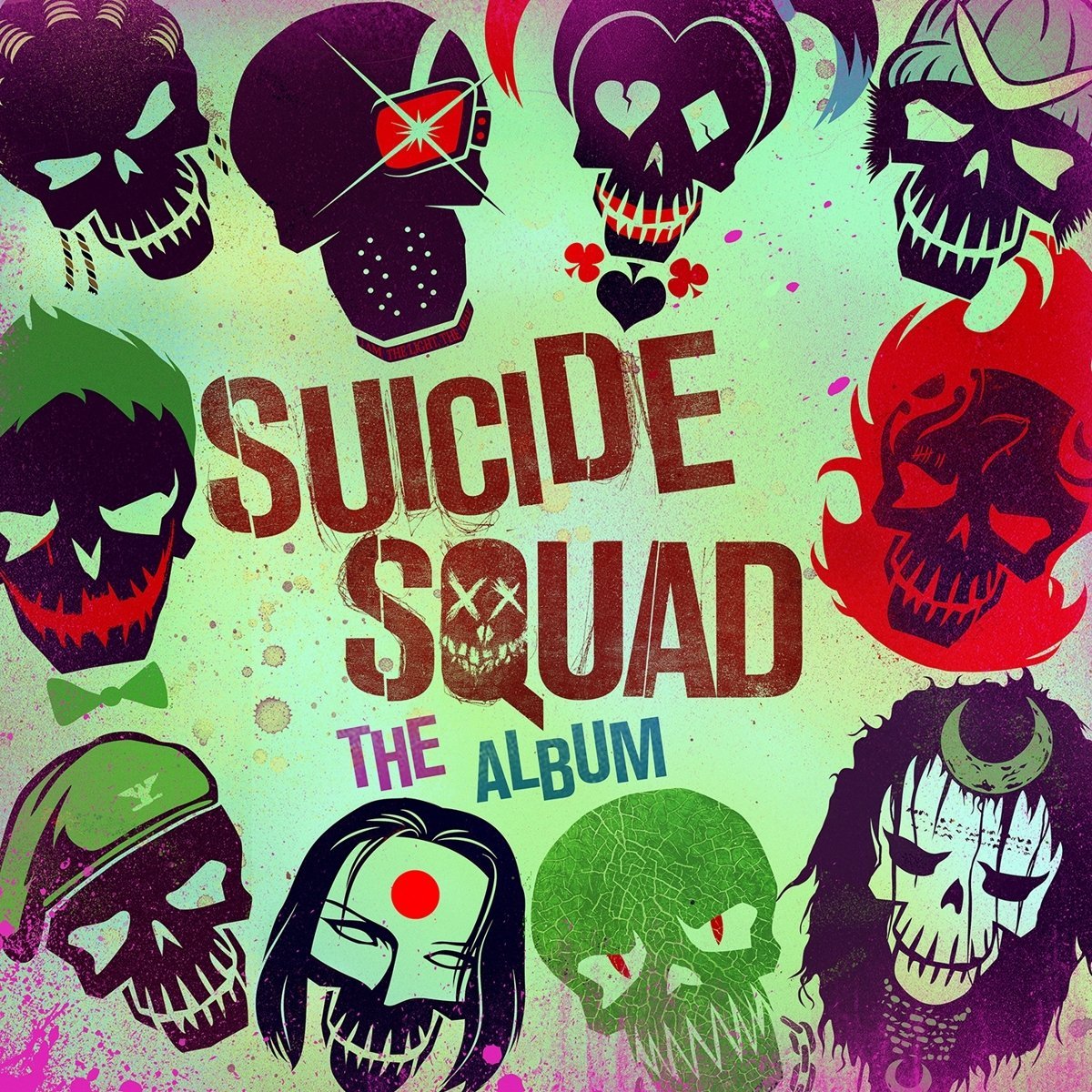 “SUICIDE SQUAD: THE ALBUM,” the musical companion to the eagerly awaited film from Warner Bros. Pictures arrives in stores and at all online retailers on Friday, August 5th; SUICIDE SQUAD opens worldwide in 3D, and in 2D, and in select IMAX 3D theatres that same day.

“SUICIDE SQUAD: THE ALBUM” is available for pre-order at http://smarturl.it/SuicideSquad. All pre-orders will receive an instant grat download of the album’s first single, “Heathens,” by Twenty One Pilots. “Heathens” is also available to stream and download everywhere. The track’s official companion video – which holds never-before-released film footage – will make its debut soon.

“SUICIDE SQUAD: THE ALBUM” is as wildly diverse as the Suicide Squad itself, showcasing new and previously unreleased material from some of the most commendable artists in contemporary music. Other highlights include tracks from such unprecedented assemblages as Action Bronson & Dan Auerbach (of The Black Keys) [Feat. Mark Ronson], and Skrillex & Rick Ross. What’s more, “SUICIDE SQUAD: THE ALBUM” also features new songs from Kevin Gates, Kehlani, Skylar Grey, Grimes and Panic! At The Disco (who offer up an astounding rendition of Queen’s classic “Bohemian Rhapsody”). In addition to these new tracks, the album features musical classics from War and Creedence Clearwater Revival, as well as Eminem’s timeless anthem “Without Me” and a modern rendition of Leslie Gore’s classic “You Don’t Own Me” by Grace and contemporary superstar G-Eazy. The album also features the first full-length version of the ConfidentialMX (Feat. Becky Hanson) cover of “I Started A Joke,” which was featured in the Suicide Squad Comic-Con trailer, named one of the most-watched trailers of 2015 with over 136 million views since its release.

“SUICIDE SQUAD: THE ALBUM” will be celebrated in the coming weeks with the continued release of several additional instant grat tracks, including “Standing In The Rain,” by Action Bronson & Dan Auerbach (of The Black Keys) [Feat. Mark Ronson] and “Purple Lamborghini” by Skrillex & Rick Ross’ – which will be accompanied by an official music video featuring a special cameo performance by Jared Leto as The Joker. Kehlani’s “Gangsta” will also be released as an instant grat along with its official companion video. For regularly updated news and information, please see www.suicidesquad.com.

“SUICIDE SQUAD: THE ALBUM” was produced by Atlantic Records President of Film & TV and GRAMMY® Award-winning soundtrack producer Kevin Weaver (Furious 7, Boardwalk Empire, The Fault In Our Stars, CREED, Girls Volumes 1 & 2, True Blood Volumes 1 & 2) and Creative Officer of Warner Music Group and CEO of both Artist Publishing and Partner Groups, Mike Caren, who recently co-A&Red the Furious 7 soundtrack with Weaver, and has been responsible for signing more than twenty Gold and Platinum-selling artists including Trey Songz, T.I., Flo Rida and Wiz Khalifa.

It feels good to be bad… Assemble a team of the world’s most dangerous, incarcerated Super Villains, provide them with the most powerful arsenal at the government’s disposal, and send them off on a mission to defeat an enigmatic, insuperable entity. U.S. intelligence officer Amanda Waller has determined only a secretly convened group of disparate, despicable individuals with next to nothing to lose will do. However, once they realize they weren’t picked to succeed but chosen for their patent culpability when they inevitably fail, will the Suicide Squad resolve to die trying, or decide it’s every man for himself?